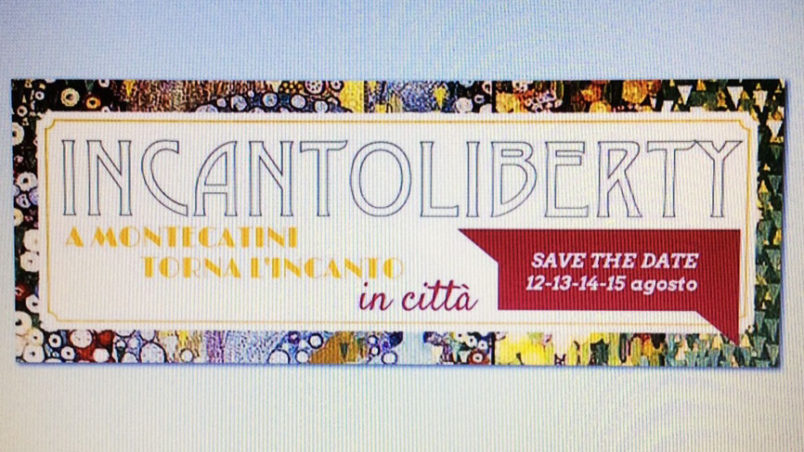 ONE CITY, ONE STYLE, ONE ENCHANTING IDENTITY
Enchanting Liberty (Incanto Liberty) arise from a vision of Beauty that survives to Time.
Liberty – essence of our city, from the most famous locations to the most hidden corners – is Enchanting itself, instant of rapture from reality, atmosphere in which the Icon takes life. The sinuous and curvy lines, the bright colours, the SPA baths and the pinewood, the perfect harmony between Art and Nature, this is Liberty in Montecatini Terme.

Event Preview
Beginning of celebrations through the city, in occasion of the Ippodromo Sesana Centenary

From 10 p.m.
Preview Show of the Event with the participation of Enrico Montesano, well admired protagonist of the movie “Febbre da cavallo”, artowrk that celebrates this year its 40 years from its premiere in Italy.

The past comes back … the coaches, the horses, the drivers in liberty style,
and in the evening the Corsa delle Pariglie, at Sesana Hippodrome

In the city:
From 4.00 p.m.
The city centre will be closed to traffic and opened to walking people and ancient vehicles driven by horses (more than twenty ancient coaches, each with its crew wearing historical uniforms!).

From 6.00 p.m.
Coaches parade through the city and back to the Sesana Hippodrome (8.00 p.m.) to enjoy the horse races night (GP delle Pariglie e GP delle Stelle).

At the hippodrome:
Arrival of the Coaches Parade at the Hippodrome at 8.00 p.m.
GP delle Pariglie (additional parade of coaches and crews, between 6th and 7th race)
Guest of honor of the night: Enrico Montesano. The famous movie, tv, and theater actor comes back in one of the place which celebrated him: the hippodromo!
______________________________
Sunday 15 August

The dinner under the stars, the show dedicated to Galileo Chini
the games and carousels in the city park

In the city:
From the mornig the city centre will be closed to traffic and opened to walking people and ancient vehicles driven by horses (more than twenty ancient coaches, each with its crew wearing historical uniforms!).

From 5.30 p.m.
Great coaches parade through the city streets and the park, with arrival to Terme Tettuccio, with runway show and award ceremony in the main square. Afterwords, the parade go back to Sesana Hippodrome at 8.00 pm.

From 7.30 p.m.
Theatre show “Il Palazzo del Trono” curated by Vieri Chini, itinerant show which will touch the Spa Baths of Montecatini, ideally following the journey of Galileo Chini to Siam, to decorate the Throne Building of Bangkok.

From 9.30 p.m.
“Cena Liberty sotto le stelle” (Liberty dinner under the stars) with the presence of the historical crews of the parades.

From 6.00 p.m.
Elegance and ability competitions for coaches crews, in the Thermal Park.

Horse driven coaches, going along Viale Verdi, in a picture of the ’20s.