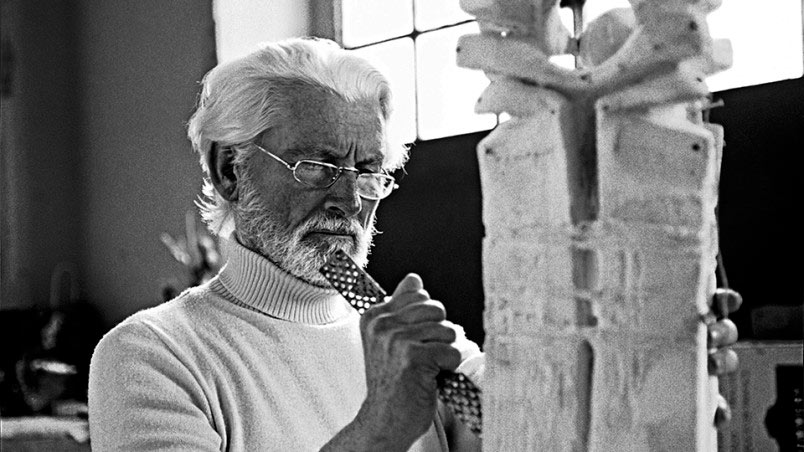 Born in Fognano di Montale (Pistoia) in 1922 he trained at the Scuola Artigiana in Pistoia and then at Florence’s Istituto d’Arte.
After terrible experiences as a prisoner in a concentration camp in Germany, Vivarelli settled in Florence in 1949.

From 1951 he worked at Giovanni Michelucci’s Fonderia – having already made his acquaintance – and established a solid working partnership with him from which emerged his Crocefisso in Pistoia’s Chiesa della Vergine (1956) and that for the Chiesa dell’Autostrada del Sole in Campi Bisenzio (1963).

In 1956 he met the architect Oskar Stonorov and began his experiments with the relationship between sculpture and urban architecture which culminated in two famous fountains in Philadelphia – Ragazze Toscane (1966) and Adamo ed Eva (1967) among others.
From the 1970s to the year 2000 he produced important work such as L’idea, la morte (1974, Rome) and Inno alla vita (1987, Nagasaki) to commemorate the atom bomb.
Freedom and the struggle against oppression are recurring themes in his art work. He died on the 1st of September 2008 in his house in Villa Stonorov in Pistoia, now seat of the Foundation he wanted to set up.

Pistoia and sorroundings From Piazza del Duomo to Ospedale del Ceppo and other sights As you descend along the ‘ripe’ – ancient roads alongside the Palazzo del Comune – you pass the Chiesa di ...

Pistoia and sorroundings Piazza Duomo, sightseeing the city centre Pistoia’s history lives in its streets. Walking along Via Cino da Pistoia which opens out onto Piazza Gavinana, ...